Central Park West bloomed 400,000 people that day as we carried earth on our shoulders. Charley Chaplin bobbed and tilted beside that blue-green sphere waving an “Oops!” sign. Green haired Captain Planet flexed his rubber pectorals, and Gandolf yelled, “You shell not pass!”

After a moment of silence a sea of voices roared down the avenue and the crowd began to march.

Hurricane-hatted men in black strode on stilts and rained silver beads while white-masked iceberg dancers zig-zagged. Ahead, a man in a business suit drenched in sweat crawled, dragging a brazier of smoking ice behind.

Papier maché bees wreathed the flowered head of “mother earth” and the statue of liberty wore a life jacket. Women with bushes instead of hair wove the crowd and a teenage girl stood on the park wall, her sharp features wreathed by a tree. When she hopped down, she left an empty space in the branches. “May the forest be with you,” said a sign. “Tree hugging capitalist” said another. A girl sat atop her father’s shoulders holding her own sign: “Greed = Death.” A college student tapped a song on clam-shell bra, “I speak for seashells” painted in blue on her belly.

Economic, environmental, racial, religious, political agendas combined for one cause, one earth.

Beneath our feet, tree roots uncobbled the street, and a dandelion banner waved “Slow Resistance.”

Among all these lovers, artists and warriors, another world became possible for as many moments as we spoke it. 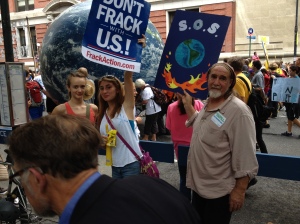 I’m pleased to announce that my flash fiction, “Ending Hunger” appears in the autumn issue of Gone Lawn: A Webjournal of Artistic and Progressive Literature. “Ending Hunger” is a modern take on Daphne escaping Apollo. In Metamorphoses, Ovid wrote that Daphne was a naiad and daughter of the river god. Apollo became infatuated with her (some say Eros was messing with him) and chased after her– presumably to have his way with her. Rape in other words. Determined to stay a virgin, she called out to her father or the earth goddess Gaia for help. Before Apollo could overtake Daphne, she turned into the laurel tree. Ever after, Apollo wore her branches wreathed around his head. I’m embarrassed by Daphne’s reasons for rejecting sex, and I don’t recommend her solution for saving the planet from human hunger, but her voice both spoke and unspoke to me one winter day as I walked my dog and looked at my arm among leafless branches. You might wonder at the strange language use at the end: words like “afirm,”  “nowing,” “sunfit,” “downsink,” and “sunhumming.” In most cases, I’m turning a noun into a verb, or merging words. It’s something Emily Dickinson did. Daphne is losing her ability to speak as she turns into a tree. Her grammar is changing as she changes. Her nouns are becoming verbs as she becomes something we think of as a noun (a tree), which is really a verb. “This” also becomes a verb at the very end. As a tree, she is living in a perpetual state of this-ing. Chinese characters nouns are like this…nouns are things in motion, a form of chi — life energy. T. Click here if you want to read “Ending Hunger.” Only 485 words.

Buy Stories We Tell: Tales from the Story Circle of the Capital District with Paypal now:

a little room for poetry and the writing life

on the poking edge of embroidery

A daily selection of the best content published on WordPress, collected for you by humans who love to read.

The Casual Way to Discuss Movies

a community of writers based in New York's Capital Region

Live to Write - Write to Live

We live to write and write to live ... professional writers talk about the craft and business of writing