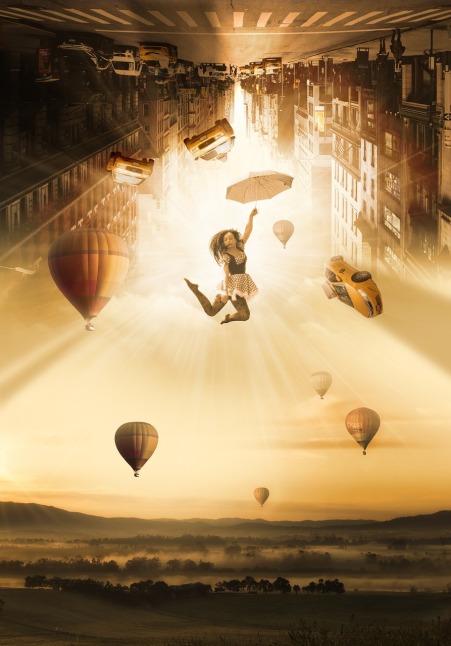 With the Adirondack Balloon Festival around the corner, an excerpt from my magical realist novel, Fallon’s Truth, seems in order.  The protagonist, Fallon, cannot reconcile her magical past in Chile with her banal present in New York City. In a sing-song voice, the past keeps retelling itself in her head at inopportune moments.  In this flashback, Fallon is referred to as Sister, her older brother is Big and her younger brother is Little. Eustacia is Fallon’s mother and Walter is her father.

Things began to happen in Chile that could only happen in the land where the earth ends. One day, when Eustacia was supposed to be cooking a pot of beans and Big was supposed to be watering the lawn, they began talking about the Big Bang and black holes. As they talked, they salivated and gesticulated. They drifted away from their posts, down the tiny street on which they lived, and out onto La Avenida de Las Condes, with Sister worriedly following.

“Did you hear? Scientists picked up a hissing sound on their cosmic recorders. They thought it was pigeon droppings on their antennae at first. But do you know what it turned out to be?” Eustacia rhapsodized.

“It was the left over sound of the Big Bang!” they exclaimed in unison. Sister was puzzling over how they could possibly tell that this hiss came from the Big Bang, especially since it could so easily be mistaken for pigeon droppings, but Eustacia and Big were talking so ecstatically that they began to physically leave the ground.

Thinking quickly, Sister ran back into the house, rummaged through the utility drawer—such a mess—and grabbed a ball of hemp twine. By the time she caught up to them, they had drifted down the avenue, but were still hovering a foot from the ground, talking so fast that their breath was lifting them like hot air balloons.

She tied the string around their ankles, and just in time, too, because a surprise thermal swept them high into the air. The ball of twine spun so fast in the cage of her fingers that it burned her palms, but she hung on with all her might. Eustacia and Big were oblivious. Other children were out, flying their kites, and when they saw Sister with her magnificent kites, they flew theirs closer. Sister had reached the end of her proverbial rope and was leaning all her weight backward to keep Big and Eustacia from flying away when Little popped up behind to lend a hand.

“Look out!” he cried. He pulled his sweater sleeve down over his hand and wrapped the twine around his wrist, jerking it to the side. “The kids are going to cut the string.”

When Walter stepped off the bus that brought him home from work, this is how he found Sister and Little, flying Eustacia and Big high in the blue sky. They only became aware of his purple face when he reached over their heads, grabbed the twine, and began reeling Eustacia and Big Brother in, spluttering epithets.

“Walter, dear,” Eustacia said as soon as her feet touched the ground, “we were having such a lively conversation.”

“They could have been killed!” Walter raged, shaking his finger at Sister and Little. Sister began to cry in earnest now, and Little to blubber.

“It is all my fault,” Big said, stepping protectively in front of his younger siblings.

“What are you talking about?” Eustacia looked in puzzlement from Walter to the children and back again. “Why are you so angry?”

“Well,” Eustacia said as she drew herself up very tall and cold. “I never. Big, children. Let’s go. Father is in a most disgraceful state. There can be no good reason for such bad behavior.” Lifting her chin, she walked off with the children trailing behind her.

But when they got back to the house, the kitchen was on fire and the lawn was drowning.

Buy Stories We Tell: Tales from the Story Circle of the Capital District with Paypal now:

a little room for poetry and the writing life

on the poking edge of embroidery

A daily selection of the best content published on WordPress, collected for you by humans who love to read.

The Casual Way to Discuss Movies

a community of writers based in New York's Capital Region

Live to Write - Write to Live

We live to write and write to live ... professional writers talk about the craft and business of writing